The way we think of careers today is quite different from how 18th century Colonial American society viewed them.

Suppose you lived in Boston in the 1700’s and you told your parents that you wanted be a blacksmith when you grew up. If they knew one, you might find yourself apprenticing with a master; if not, you’d be out of luck. That’s because career opportunities were largely predetermined, often restricted by social class, and social stratification was almost always out of the question. 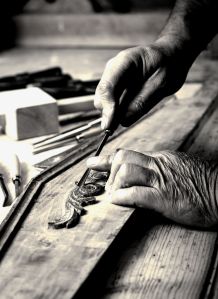 A modern artisan practices woodworking, one of the colonial trades.

Once a boy reached the end of childhood, about eight to 10 years old, he was apprenticed to a master artisan where he could learn a lucrative trade to support his family. Just like in England, from whom and where someone received their training was based mostly on primogeniture. For example, Cobblers, considered the lowest class of artisan at the time, only apprenticed boys from less than well-off families, whereas a middle-class family could afford to send their son to a silversmith. The artisan guilds held an immense persuasion over the public and influenced politics equally, conferring only those apprenticeships which were completed under their stringent guidelines.

Gaining an apprenticeship was really the only way for most people to enter a non-agrarian profession at the time.

Landholders throughout the world involved themselves in lucrative careers that focused on land cultivation; to provide food or other products to their respective populations.

In North America, slaves were bought and sold, a trade within itself, and they provided the bulk of labor on southern plantations. Planters typically hired overseers and accountants to manage their holdings and bought the contracts of indentured servants, who could earn their freedom after seven years of service. Many indentured servants — including some slaves — went on to own their own farms and plantations.

New England farms were maintained almost exclusively by landowning households; with fathers and sons working side by side in the field, labor costs stayed low. The women took care of household duties, such as sewing, cooking and caring for the farm’s livestock, which also contributed to the developing gender roles in North America.

Most trading activity did not require the use of cash, and credits and debits were settled mainly by swaps of goods and services — in other words, it was largely a barter system.

Artisans came from an array of colorful backgrounds and took on a multitude of skills to boot: cobblers, silversmiths, cooks, masons, bedders — who made upholstery — and farriers — who made horseshoes and other goods from iron. These professions defined middle-class city life in Colonial America.

The public exchange of goods was a personal affair

The local manufacturing chain rarely included middlemen; if you wanted shoes, a cobbler would build you a pair from scratch; if you needed a basket, one could be weaved. The idea of going to a store to buy prefab goods on a massive scale wasn’t quite conceived yet. With shopping personalized, local economies thrived!

There was no such thing as an hourly wage, let alone a minimum, and earnings were calculated on a piece-by-piece standard.

Professional Careers Enjoyed By The Gentry

Members of Colonial Society’s Upper-Class were commonly referred to as the Gentry. The Gentry included doctors, merchants and lawyers, who held positions of influence and leadership in the community.

Merchants accumulated their wealth through the importation of goods from Great Britain. They also employed a vast number of people, including deckhands, ship captains, slaves and accountants, and were perhaps Colonial America’s largest employers.

Doctors earned a living not only by taking care of the sick, but by selling remedies as well, like a modern pharmacist does. They usually were paid in cash, but bartered as well.

The lawyer’s main job hasn’t changed much since the 18th century; to argue points of law. However, Colonial laws had yet to be ironed out, so many of them doubled as lawmakers, with even more finding themselves in greater positions of political influence. Though politicians were not paid for their services, lawyers were. And like doctors, fees could be bartered or paid for in cash.

Note: For the sake of preserving space, this article has been condensed and presents some extremely broad information about an immensely complex subject.