The conspicuous WWI “Victory Arch” in New Orleans’ upper 9th ward in Macarty Square is a striking reminder of the segregation that was until relatively recently the norm. Originally built in 1919 in the center of the square, it was moved to the Burgundy street side of the park in 1951 to accommodate a school still in operation. 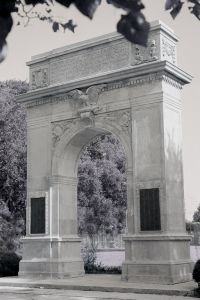 Most curious if not surprising is the segregated list of 9th ward participants in the Great War-the “white men” who served, died and were killed in combat on separate plaques than the “colored” men who did the same service. The neighborhood sent 1231 men and 1 woman to the war effort. Oddly more died while in the service in non combat roles than were lost in battle.

I came upon the arch while researching the childhood neighborhood of Lee Harvey Oswald who grew up there in the late 1930’s and 1940’s. The future presidential assassin was born on Alvar street adjoining Macarty Square and lived in a number of homes in nearby streets. It’s not hard to imagine him playing in the square and at some points perhaps imaging what it must have been like for those who participated-the great majority of whom survived and moved back into the 9th ward.

The high number of per capita participants and the racial and gender breakdown of the participants is telling in many ways. The nearby arrest of Homer Plessy in 1892 on Press Street lead to the landmark Plessy/Ferguson case confirming segregation. This lead to the “Great Migration” north and similarly increased the participation of Southern blacks in WWI. As a poor and lower middle class neighborhood, the 9th ward as did most urban poor neighborhoods sent disproportionate numbers to war.

Today the arch is a largely forgotten relic of a bygone era in a neighborhood in transition. One wonders if at some point the burgeoning supply of politically correct out of state transplants will attempt to “fix” the plaques by integrating the lists of participants.

In a town where statues of Civil War seditionists greatly outnumber those of the victors this seems remote.
​